In Douglas Burdens’s The Battle of Giants there are two men who have laid their money down on killing a bull moose with no less than a 72 inch rack. With this betting they have made subsistence hunting into a game that seems to be a waste of this particular resource. The resource of food is a very important one to the natives and others and it is sad to see when those who go hunting are more concerned about returning with the largest prized rack than the food they have hunted. In this story it looks as though the hunter returned with the rack and the meat although his happiness was centered on the rack. 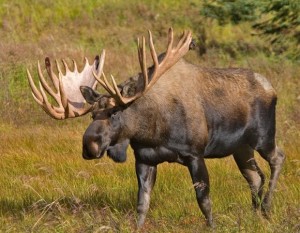 Another resource that isn’t often thought about is the resource of knowledge and teachings. I thought that the interview of Jacob Ahwinona was rather funny. He talks about how greedy the white man was when he came up to Nome for gold. The white man didn’t think about asking those that live right there. Ahwinona is baffled as to why the white man never thought to ask the Eskimos. Even though he says they would never tell he thinks it funny that the greed of the white man would blind them so much. “If I want it, I’ll walk out there, I’ll look at it – it’s right there – why the heck didn’t he look there?’ The white man never thought about the resource of knowledge that is always there but is often ignored.

Tradition is another important resource. Although it is often slower and often seen as odd there is something in it that makes it worth its while. Like in Richard K. Nelson’s Moon of the Returning Sun there is the tradition of the seal hunt. Even though he takes along more modern technologies he still has the patience to wait hours on end for a seal to surface at a breathing hole. There must be a certain feeling of accomplishment when hunting in the traditional way. If tradition is lost then we as a people lose a sense of who we were. 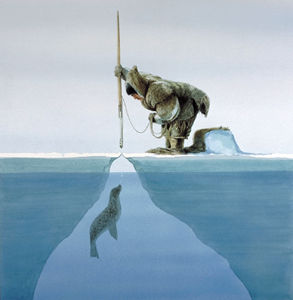