Initially, I was not looking forward to this class or the content. I remember my Alaska Studies lessons with discontent, and used to find I wasn’t interested in the literature or history that my state had. However, upon discovering the absolutely engaging content in the assigned book, I was hooked. I learned about the different types of people that inhabit this state, the different areas, as well as the different ways to approach Alaskan literature. 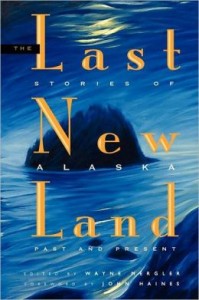 I never thought reading about Alaska could make me fall more in live with this state, but in Frank Dufresne’s last paragraph when he describes “In its dying rays of magenta and deep purple, we watched an enormous migration of sandhill cranes float down from the sky like five thousand open umbrellas…” I had to pause and internalize that metaphor (113).

It is with beautiful language that one is able to translate the visual, but without my experience small passages like that would be lost on me. This course has just reinforced and reemphasized my enjoyment of Alaska and its people, but also the variety of people and terrain that is found here. I was surprised when someone as far away and well-known as Rudyard Kipling took the time to write about Alaska, even though he had not visited, but was enchanted enough simply with the idea of Alaska that he set his short story here.

Probably my biggest take-away from this course is an appreciation of Alaska in literature, and a newfound openness to exploring the content found locally.