Literature of Alaska is heavily influenced by the extreme character of its landscape and the effects of its climate.   The inhabitants of this land who choose to tell stories, both written and oral, about this land, are forced to shape their protagonists’ actions to counter the climate or have them suffer the consequences.   The extreme climate and landscape bring out the strongest survival characteristics in people, including companionship, care for one another, patience, suffering, and cunning.   Different people are shaped by their cultures to use the resources of the north in different ways.   Some consider the earth, air and waters to be both spiritual and survival resources.   Others consider them to be primarily material resources.

Velma Wallis, in her famous book TWO OLD WOMEN (1993), tells the story of two old Athabaskan women who have been abandoned by their tribe when there was not enough food to feed everyone over an extended period of time.   The two old women, although cherished, were considered to have outlived their usefulness because they had been cared for, for some years, while always complaining, and without inputting indispensable food or skills to the tribe.   The two old women make up their minds that they will survive,     “…or die trying.’ (p. 470, Last New Land (LNL), Mergler)   As the story (which is based on Athabaskan oral stories handed down) progresses, they discover that they were not so helpless after all.   “With her eyes on the squirrel and her movements deliberately slow, she aimed the hatchet toward this target that represented survival.   The animal’s small head came up instantly and as Sa’ moved her hand to throw, the squirrel darted up the tree.   Sa’ foresaw this, and, aiming a little higher, ended the small animal’s life in one calculating throw with skill and hunting knowledge that she had not used in many seasons.’   (p. 471, LNL, Mergler).   The harsh climate brought out their survival instincts by putting them in a situation in which they could starve or freeze to death.

Two other suggested stories, which cannot be discussed in the scope of this blog, in which survival (and death from not respecting the elements as well) can be explored   are:

Chapter titled “The Flood’ from biography SHADOWS ON THE KOYUKUK:   AN ALASKAN NATIVE’S LIFE ALONG THE RIVER (1993) by Sidney Huntington, as told to Jim Rearden. 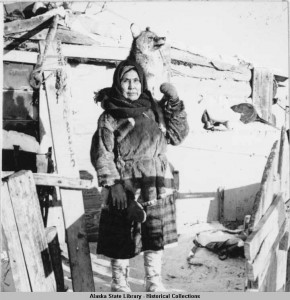 In another story from the book WAGER WITH THE WIND:   THE DON SHELDON STORY (1982), we see the attempted material exploitation of one of the natural resources, the Susitna River, by the Army Corps of Engineers in a location called Devil’s Canyon.   The intent of Corps was to put a power plant in Devil’s Canyon in order to harness the 6,750,000-gallon per minute power of the current (p. 526, LNL, Mergler).   In this story, a small party of U.S. Army Scouts attempts to take a 50-foot boat up the Susitna River and Devil’s Canyon without having enough respect for the roiling current.   They wreck the boat, of course, due to their arrogance.   Luckily for them, Don Sheldon, a famous Alaskan pilot, checks on them and discovers their wreck.   He perseveres in his attempt to find them, and finally locates them on a ledge on a bumpy stretch of water.   He floats the plane backward down this stretch of water 4 times, risking his life, to remove the Scouts from the ledge.   He finds the last Scout 18 miles below the Canyon, in shock, and rescues him as well.   The characteristics of caring for others and skill displayed by Don Sheldon are shaped by the forces of the land of Alaska.   The climate demands that humans take care of each other.   The longer people are subjected to the climate and landscape, the more intensified this sense of caution and caring can become, as in Don Sheldon’s case.

Other recommended stories, which cannot be discussed in the scope of this blog, which explore the characteristics of caring for others and skill attained by living in the harsh climate of the north are:

STICKEEN (1909) by John Muir, which brings caring for an animal into the picture.

To summarize, Alaskan literature is heavily shaped by its extreme landscape and climate.   People rely on self-sufficiency, caution, cunning, patience, skill, and teamwork, among other characteristics, to survive here.   This environment is fodder for endless wonderful stories.   I recommend the compilation of Alaskan story excerpts THE LAST NEW LAND (1996) by Wayne Mergler if you’d like to further explore many Alaskan authors.