What sums up most about this semester of literature of Alaska are that most of the writing is centered in the great outdoors as the center piece, and secondly, the great people that have made history in the north. The writings may be about the writer themselves. It may be another person or group of people, such as a native population or hunting party. The great Alaskan wilderness, and everything it encompasses, is the over powering force that governs everything that we do. Nature, the force to be reckoned with, must have her glory!

Writings, such as Sam Keith’s writings of Richard Proenneke, detail the man, the human force, trying to make a place in the ultimate force, the Alaskan frontier. Proenneke’s cabin builds in size, as the seasons change and he is able to get his cabin secure and a nice fireplace just in time for snow. The human force won in that race this time, but in many other times has failed miserably. This leads him into years of enjoying his cabin while watching the local fauna and flora, the seasons pass, and the years go by. Only old age brings him from his perch on the parcel at Twin Lakes back to the lower forty eight. The cold winters finally win, and the ever present Alaskan force of nature wins once again. The Alaskan environment is key to the stories of Alaska, pure and simple. Without it, the stories would not exist. 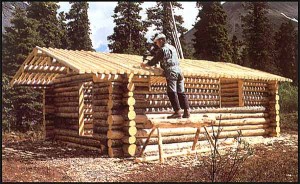 So what do Alaskan stories all have in common, from the gold prospector, the hunter, trapper, road builder, or any other character? The environment is the ever present protagonist, or antagonist, possibly even both. It is a force that cannot be ignored. From the beauty of its landscapes, or the harshness of its winters, it is always there to be a serious player in the stories of Alaska.