When I think of sharing of culture, I think of all the great restaurants we have in Fairbanks; Mexican, Chinese, Japanese, Thai, etc.   It is interesting that we do not have any Native American restaurants even though this culture composes slightly over 15% of our state population (see census information in the chart below). 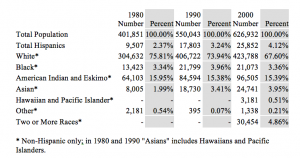 To some extent, I think that whites tend to glamorize other cultures and incorporate the traditions and foods they find exotic, interesting, and/or compatible with their own.   In Alaska, whites have embraced Native values and traditions such as subsistence fishing and hunting, and dog mushing.   See BLM’s Intro to Dog Mushing History: https://www.blm.gov/ak/st/en/prog/nlcs/iditarod/history/people/mush_hist.html, “Before contact with the Russians in 1732, Inupiaq and Yup’ik peoples of the Bering Straits had already adapted their masterfully designed wood latticed and gut-skin covered  kayaks into an over-the-snow craft, minus the skin but plus ski-like runners to glide over snow when pulled  by dogs. The average team was three dogs, with their master running ahead to guide their dogs between  villages, fish camps, and hunting camps.’

I think that the whites that have moved into this land have also incorporated the family values of Alaska Natives.   It is not uncommon to see all individuals in our community helping others in need and sharing their tables and homes with others in need.   Our harsh climate could also play a part in this cultural value but I think that whites have learned from the Natives that this is a value that is suitable and healthy for all who live in this land.