In “Ice Palace’ people are described as energetic. Streets are busy with people and buildings are beginning to be more moderns. Stores and office buildings line the streets and the people of the town seem to have energy as they go about their lives. Occasionally there is an old sourdough that stands out in the young, bustling crowd. This description caught my attention. Although the author is writing about Baranof, I can see Wasilla in this description too. The downtown area is bustling with people in the summer. The library and museum are gathering spots for families. People have energy about them as they walk to the farmers markets or patron nearby businesses. There has been a lot of growth in Wasilla, and more is proposed as traffic lights and sidewalks are in the planning stages to make the growing town more pedestrian friendly.

Ronald Johnson talks about vagrancy in Anchorage in the early 1990s in “The Scene and the People.’ I grew up in Anchorage and can remember knowing the names of the local homeless people. There were some who we would see almost daily on the corner of Northern Lights and Minnesota. Newspaper stories were printed about one local homeless man after he died. Today in Anchorage the police have moved a bit away from the tickets for vagrancy, but have instead cracked down on panhandling. They are not as concerned now if homeless people hang out on street corners as long as they are not soliciting money from passing motorists. This is supposed to be to increase safety of motorists as well as the homeless population. There has been a lot of discussion over this in the city. Anchorage is certainly a growing city. I see changes almost every time I drive to town.

Anyone who was here during the 1964 earthquake has stories to tell about where they were or the destruction that was caused due to the massive quake. My dad is one who was here and I have heard stories from him about his experiences in the quake. In “Shattered Dreams’ Kim Rich paints a picture of the earthquake and the mess it left behind. Disasters like this are important to Alaskans. We should be prepared for the worst and hope for the best. Our isolation from the rest of the country limits our food supply. We should all have some emergency storage because let’s face it, we live in earthquake country. 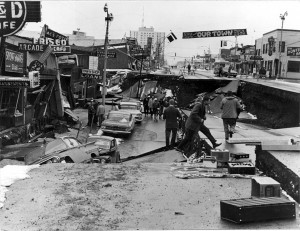