My perspective has always been that the Alaskan wilderness is right outside my door.   My boundaries with nature have felt non-existent (except those brutally cold days that make me want to stay inside).   However, reading William Cronon’s “The Trouble with Wilderness; or, Getting Back to the Wrong Nature’ caused me to think more deeply on this subject and opened my eyes to an entirely new perspective.   At first, I resisted the idea that wilderness is a man-made concept.   It seemed absurd.   However, as I continued to read his document, I began to understand, and agree, with his assessment of how mankind has progressed from viewing nature as a place of violence and terror to nature as a place that is set apart from us all as pristine and untouched by humans.

Cronon maintains that an ancient and wild tree is no better and no less than a tree that has been planted and cared for by a human.     In order to eliminate the separation between man and nature, one must learn to see and honor them both as wildness.   Nature, and wildness, can be seen all around us, whether we live in the city or the country.   Yet, I agree with Cronon that the concept of wildness/wilderness that many people embrace is that it is a place that is untouched, uninhabited, and unused by humans.   On this perspective, Cronon takes an interesting position: “Only people whose relation to the land was already alienated could hold up wilderness as a model for human life in nature, for the romantic ideology of wilderness leaves precisely nowhere for human beings actually to make their living from the land.’   He follows this concept to its extreme: “if nature dies because we enter it, then the only way to save nature is to kill ourselves’.

I do see believe it is mankind’s responsibility to protect the wilderness.   But, like many things, the pendulum seems to swing to extremes between greedy exploiters with no regard for the destruction arising out of irresponsible methods and elitists that want to leave a place so untouched that it prohibits access by the average citizen.   Protection should include access or development that is responsible and takes into account sustainability.   This brings to mind recent approaches in the rainforests which encourage residents to plant crops, such as coffee, that are compatible with, and do not require the removal of, the existing forest.   I think that if we continue to look at our wilderness in that way, the existing false dichotomy would eventually fall away. 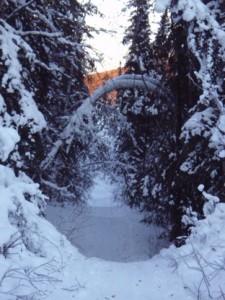