People identify New York with vibrant culture and big city lights, Washington DC with politicians and government, and Arizona with the Grand Canyon and blooming cactus flowers.   When people think of Alaska, they visualize soaring mountain peaks, calving glaciers, and abundant wildlife.  I think this is good evidence that our perceptions and perspectives of a place are often stereotypical; which is not necessarily a bad thing.   Stereotyping can help one feel that they are actually there as they read the literature or listen to the story.

No story about Alaska would feel real without descriptions of our dramatic landscape.   One of my favorite passages from our readings so far is the following from Rex Beach:   “The glaciers to right and left were mute and motionless in the grip of that force which alone had power to check them; the turbulent river was hidden beneath a case-hardened armor; the lake, with its weird flotilla of revolving bergs, was matted with a broad expanse of white, across which meandered dim sled and snow-shoe trails.’   I love this passage because it not only describes the scenery but portrays the nature of Alaska; tough and powerful.  It also shows the state of flux that we are often in; the frozen cold of winter, juxtaposed with the surging of the ice free river and then topped off with the human element as evidenced by the trails of sleds and snowshoes. 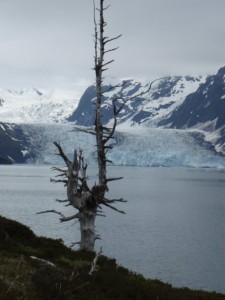 This passage contrasts sharply with another in Beach’s book “The Spoilers’.   Here, he describes a ship’s arrival in Nome: “He indicated a gap in the buttress of mountains rolling back from the cost.   “It’s the greatest creek in the world.   You’ll see gold by the mule-load, and hillocks of nuggets.’   This particular story, which entails great descriptions of the land’s resources, does tend to make one feel separate from the land; like a predator or thief.

From my readings, I either feel like an observer or a taker.   Both of these roles are separate from nature itself.   Could there be other roles portrayed?   I’m not sure.   I think poetry may come the closest to bridging that gap.

Because he actually spent time in Alaska before writing about it, Rex Beach’s narratives are very realistic.   According to the Literature Network, https://www.online-literature.com/rex-beach/, Mr. Beach was drawn by the Klondike gold rush and moved to Alaska when he was in his early 20’s.   He tried his hand at prospecting but, after 5 years, he realized he was not going to line his pockets with riches and turned to writing.   He became a prolific and successful writer whosestories were adapted to movies and the stage.  Actors who played in the movie adaptions include John Wayne, Marlene Dietrich, and Gary Cooper! 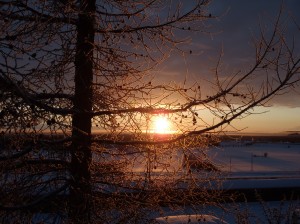 Wintery view from the University of Alaska Fairbanks campus.