This week Madara asked us to discuss our understanding of the Alaskan Wilderness. What are its boundaries for those of us living here?   Do we have a role in protecting the Wilderness? If we think about the Wilderness as thing to be either protected or exploited, does that set up a false dichotomy, like Cronon seems to think, that ultimately gets us into trouble?

William Cronon, in his essay “The Trouble with Wilderness; or, Getting Back to the Wrong Nature” (1995), expresses that the “wilderness” of today is actually a human cultural creation.     He makes the great point that 250 years ago, the term “wilderness” meant a “waste” where a person could fall prey to evil.

Why do we view wilderness differently today?   Why do we crave the landscape, bare of human touch?   Cronon quotes historian Frederick Jackson Turner’s idea that wilderness began to be valuable to the American people at about the same time the “free” land of the frontier was disappearing.   He asserts that this is when the shift in perception of wilderness began for the American people, and proposes that our identity is wrapped up in wilderness.   In the 22nd paragraph of his essay, he states:   “It is no accident that the movement to set aside national parks and wilderness areas began to gain real momentum at precisely the time that laments about the passing frontier reached their peak. To protect wilderness was in a very real sense to protect the nation’s most sacred myth of origin.”

My wilderness boundaries lay not far from my door.   Moose, foxes, rabbits, birds and other wild creatures are frequently in my yard – even bears come by two or three times a year.   They are wild.   However, I do not live in the wilderness.   To get into what I define as wilderness, I have to travel about twenty miles from the lights of our small town and the highway, to a place where I only hear, see, and feel nature.

Once I get into “my” wilderness, I’m OK with having the trappings of civilization such as a small gas cook stove and whatever I can pack on the horses.   I don’t have to be relying only on only things you find in the wild to survive.   You could do that if you had to, but it would take an organized effort and a lot of luck!   Not to mention the misery you would go through.   You will laugh, but the thing I would miss most from civilization would be dental floss.   I guess I would have to use my hair or stripped roots, which could double as rabbit snares…

We, as humans, definitely have a role in protecting wilderness.   We need to keep wild spaces from the developers!   If the day comes where I cannot find a place to go without seeing or hearing people, then we have failed.   On the other hand, we need to keep the wilderness out of our civilization as well.   In our town, there used to be a push to extend the no-trapping boundary around Denali Park in order to protect the Park wolves.   I thought this was completely crazy (with all due respect to the wolf pack) because all this would do would increase the conflict between wolves and humans.   The wolves would simply come in and eat people’s dogs!   Wilderness would be better preserved if it stayed within its vast boundaries of Denali National Park.

We can’t think of wilderness as something to be either protected completely from the human touch, or to the contrary exploited for profit.   Instead, we should see ourselves as part of wilderness, and understand that if we treat the wild lands with respect and conservancy, it will regenerate itself and be there forever. 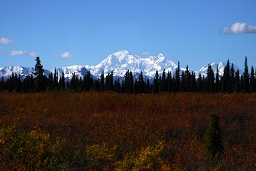