There exist different ways to explore a dichotomy of existence above and resources below.   The monetary economy of   surface Alaska depends much on resources extracted from below the earth or ocean surfaces in the form of oil, coal, natural gas, gold, copper, and fish or crab.   Likening the environmental resources of Alaska to an “interior” identity of Alaska made up of cultural values and resources gives us an above/below dichotomy to explore.

Jacob Ahwinona’s oral account of the “discovery” of Nome (https://jukebox.uaf.edu/site/interviews/jacob-ahwinona) can be interpreted as his culture’s statement on what a resource is.   Ahwinona is a full-blooded Eskimo.   He emphasized that his people were here for generations, and they saw no value in the gold.   They recognized as resources the land and the water; they knew where the gold was but they did not consider it a resource.   After all, gold was no aid to survival.

Ahwinona resented that the “three lucky Swedes” were credited with the discovery of gold in Nome.   According to him, the whereabouts of gold was known by most Eskimos, but the information remained confidential within their groups because of the effects of white man’s greed over gold.     In the interview (Community of Memory 1996, Project Jukebox, url listed above) he states:   “…Eskimos got unwritten laws, they have confidentiality in their own groups, and families, you don’t let out information that’s going to be not good for anybody else but the greed. Most Eskimos are not greedy. We share and share alike. But my teachings are, if a person is greedy, he won’t get nowhere. It’s the greed that spoil’s his living conditions. But to me, long as I’ve got something to eat, I’m happy.”   Obviously, to him,   gold is not a resource.   It lays below, like seals under the ice, but it provides naught for survival.   He seems to view his “teachings” as an internal resource.   He talks about gold and how it “ruins” people.   He says, “You know, that gold, that ruins people-the one thing that ruins them are the people who want everything for themselves. It doesn’t work out that way. If you’re going to get something out like that, you have to share it with everybody, share and share alike. That’s the only way it will work. Anybody that comes up here looking for gold-the white man did-they walked right over it, they didn’t even know it was there. They walked right over it, they didn’t even know it was there.”   And again, speaking of how the Eskimos knew the gold was there while the white miners didn’t:   “But to me, long as I’ve got something to eat, I’m happy. It doesn’t have to be the gold, heck that gold is nothing. It doesn’t bother me a bit. I know it’s there, but to me as long as I got something to eat, a roof over my head, I’m warm, I’m happy.”   It could be said that he knew that if you are wise and humble and not greedy, you can see the resources that exist below. 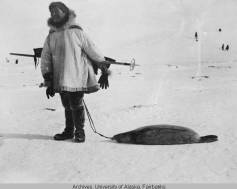 Hunter With Seal
From the S.R. Bernardi Photographs in the Alaska Digital Archives.   Below is the reference url:
https://vilda.alaska.edu/cdm/ref/collection/cdmg11/id/1207

If we look at a different story about Eskimos, an excerpt titled Moon of the Returning Sun from SHADOW OF THE HUNTER (1980) by Richard K. Nelson, we see that gold and oil are not even mentioned as resources.   The time period of this story is vague, but binoculars and a kerosene lamp are used by the old Eskimo, Sakiak, in this story, so we may assume it unfolds in the 20th century.   On page 398 of THE LAST NEW WORLD, excerpts of literature about Alaska edited by Wayne Mergler (1996), in the excerpt Moon of the Returning Sun, the protagonist Sakiak is on the sea ice, which has been jumbled together by the forces of the ocean currents and the wind, and Nelson writes:   “To the unpracticed eye this jumbled seascape would have seemed utterly impenetrable and unattractive.   But to the Eskimo it held a different promise.   He would find an easy trail by weaving among the hummocks, crossing them at low places.   And he would find his prey, the seal, that now swam in dark waters beneath the pavement of ice.   For although this world appeared silent and lifeless, the sea below was rich with living things.”   There is a dichotomy of seeing nothing above but with internal knowledge, a person knows the resources are below. 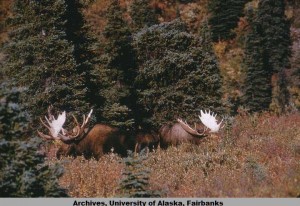 This photo is taken from the Alaska Digital Archives, from the Ernie Carter Photographs Collections. The reference url is listed below:

Big game guide Tom Walker explores an above/below dichotomy of yet another kind – that of the feelings we show on the surface versus the emotions we struggle with below.   On page 422 of Last New Land he ponders:   “I’ve always had mixed feeling about shooting a moose, or any animal for that matter.   I’ll want or need the meat—and antlers if hunting with another—but I don’t enjoy the kill, butchering, or pack.   The stalk is the hunt.   The work begins when the trigger is pulled.   But the meat is always so good, so palatable, that it along puts pressure on the trigger finger.   A winter without moose meat, or other wild meat, in the cache or freezer is like a winter without snow.   When you’ve got it, you tire of the monotony, but without it you wither longing for it.”   (And, may I add, that you just wither from plain hunger for it!   Wild meat is subsistence meat in my household.)   On page 422, after his client shoots a huge moose, Walker continues exploring contradiction of the elation displayed on the surface versus his raw feelings underneath:   “Instead of the satisfaction that I’d have felt ten years before, I felt tired, quietly depressed.   I fought against it, didn’t like the feeling, and didn’t understand it.   Instead of pride in my woodcraft skills, I felt sadness.   We had not cheated but worked hard, and fairly, to kill this moose.   It had not been easy.   We had hunted each day, every day, regardless of weather.   Other than the binoculars and the gun, our only tools were our mental capacities.   No vehicles, airplanes, or technology.   We’d sought the bull on his own ground, in as basic a way as reasonable.   I’d always felt remorse at an animal’s death but this confusion I couldn’t grasp.   Something had gone from hunting.   The stalk still carried the energy-high and excitement… but the kill?   Vaguely I wished the bull alive.”

Wild game is considered a resource in at least three different ways by the state of Alaska.   First of all, it is considered to be a subsistence resource used by people to survive.   Secondly, it is considered to be a recreational resource.   Thirdly, it is a main source of financial income for hundreds of licensed big game guides.   The additional spiritual resource it offers may be considered by some to be part of the recreational resource, but in truth it goes much deeper than that.   Many people, regardless of skin color or ethnicity, are connected heart, spirit, and soul to the wilderness resources of Alaska.   We need to use these resources wisely, with eyes to the future, so that they can remain available for future generations.