At retirement, Richard Proenneke built a cabin at Twin Lakes in what is now Lake Clark National Park, in the Lake and Peninsula Borough of Alaska.   According to Wikipedia, he spent much of his life as a heavy equipment operator, commercial fisherman and diesel mechanic in Alaska, arriving after World War II. ¹   He retired to pursue his dream of building a remote cabin out of the resources of the wilderness.   In the chapter “The Birth of a Cabin” taken from Proenneke and his life-long friend Sam Keith’s book, ONE MAN’S WILDERNESS (1973), he begins with:   “Up with the sun at four to watch the sunrise and the sight of the awakening land.   It seems a shame for eyes to be shut when such things are going on, especially in this big country.   I don’t want to miss anything.”   I am heartened by how much he cares for what he sees around him.   Proenneke is a clean spirit, humble and grateful for what he sees around him.   As the landscape is peaceful and serene, so is he.   This is a man without a mask, who is the same on the outside as on the inside.

Proenneke and Keith describe in minute detail Proenneke’s everyday life at Twin Lakes.   Every little task of the day is savored, as though each moment brims with life and importance.   Nearly one hundred words go into describing a luscious breakfast cooked “over a wood fire in the early morning.”   He looks out the window during breakfast and   launches into a description of the wildlife outside, as though nothing in the world could be better.   It’s as though he’s a boy reborn, experiencing the raw, joyful emotions a child feels.   The chapter overflows with scintillating descriptions of animals living in close proximity to him.

Later in the chapter, he paints another scene: “When the fog finally cleared the face of the mountain across the ice, I sighted a bunch of eleven Dall ewes and lambs.   Five lambs in all, a good sign.   A mountain has got to be lonely without sheep on it.”     This statement says,   “I am not alone, nor am I lonely.   I have the land, I have the animals, I have myself; and I am happy with that.”   The landscape is a parallel for his emotions.   He has spent his time in civilization, working for others, and he is now here, cleared from the fog – working on his own, without interruption or the imposition of another’s ideas or goals.

He has completed his work of art, his masterpiece of cohabitation with the wilderness, his cabin; and he writes the following:   “This evening I sat on my driftwood pile admiring my cabin.   Pale blue wood smoke rising up through the dark boughs of the spruce and beyond, looming huge and majestic, the jagged peak of Crag Mountain.   The cabin was complete now except for the fireplace, and maybe later on, the cache up on poles.   It was a good feeling just sitting and reflecting, a proud inner feeling of something I had created with my own hands.   I don’t think I ever accomplished anything as satisfying in my entire life.” 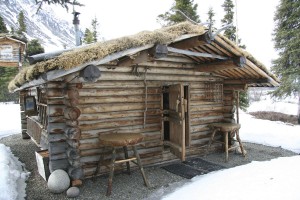 Landscape is such a prominent feature in Alaskan writing because it is so inescapable in Alaska.   The enormity and vastness of the land inspire awe in those lucky enough to experience it.   We have mountains in our state, everyone else has hills in comparison.   We have endless miles of tundra, they have a gas station every 50 miles.

The landscape shapes those who live in it.   A certain kind of person will bend to and live with it,   seek it out, as did Proenneke.     His writing is a living diary, his soul showing through as he reaffirms his own character and place in the wild.