The vastness of Alaska’s wilderness is captured well by John Haines. In the passage titled, Of Land, Sea, and Air, he describes a trail in the woods, which easily shoots off into many possible roads. I can imagine the confusion that would quickly set in as you scramble to remember landmarks and trees to find your way out of the dark forest. I have not spent much time in the Fairbanks area, but could imagine being almost lost in the woods as Haines provided a visual description of the “strange trail.’ I imagine the trail would look something like this photo of the Millard Trail which is included in the Alaska Digital Archives. 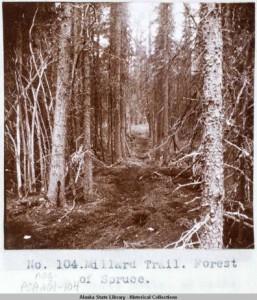 Haines uses words to bring us on a journey. We adventure with him on the tundra as he describes the sights, sounds, and smells of hunting season. In The Tundra, Haines writes, “In the tangled lakes of its eyes a mirror of ice is forming, where frozen gut-piles shine with a dull, rosy light.’ The visual image he creates of not only the many lakes which dot Alaska’s land, but also the frozen gut-piles, signifying successful hunts are accurate for Alaskan hunters. He further writes about the campfires and sounds of hoofs, which are also a part of hunting on Alaska’s tundra.

Haines demonstrates a respect for Alaska, including the land, animals, and people found here. I think his writing is in line with the general personality of Alaska’s people. The people of this state are considerate. So many live off the land in one way or another. Locals gather blueberries, stock freezers with fresh salmon, or hunt big game on the tundra. Haines’ writing depicts people unified, together enjoying the beauty and wonder of Alaska.

Further reading I did on John Haines as a person was very interesting. He seemed to be continuously drawn back to Alaska, although he was not originally from Alaska. This personal preference for being in Alaska is also common among true Alaskans. I was born and raised in Alaska. I left in 2008 because of a military assignment, and was grateful to return to Alaska in 2010. The culture of our state becomes part of us, and I do not intend to live anywhere else again. (https://www.adn.com/2011/03/03/1734045/celebrated-alaska-poet-haines.html)