Hey folks, I just want to let you know that last week’s discussion went great. Sometimes I can’t join in until later, but you all did a great job talking to one another and sharing resources. Just a brief reminder that referring to your reading assignments from this week is important. The discussion area is a great place to talk about what you’re reading so that you’re more prepared for the midterm and final.

A map is a kind of mask. It’s a constructed surface used to help someone understand what the mapmaker finds valuable or important. Geologists use topographical maps to display geographic information.   Political scientists use political or demographic maps display information about people or populations. Businesses and organizations create tourist maps to encourage interaction with tourists. You get the picture. 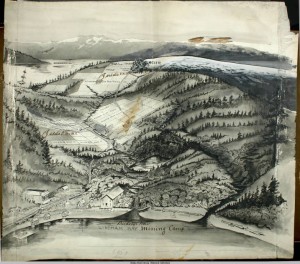 Watch this very short TED Talk by Derek Sivers and then discuss the topic of mapmaking and values.

How are the authors from this week’s reading assignments mapping their world? What value systems are at work when they “map” the Alaskan landscape? Discuss some ways in which you might re-map your own, local Alaskan landscape in order to see it in a new light.

Also, feel free to browse some of the details of this book on the 1899 Harriman Expedition: